I've been putting off writing this post.  I haven't felt ready, and I still don't -- but I don't know if I'll ever really be ready.

We lost our dog Chance a little over a month ago.  He was our first baby, and this has been so, so difficult for us.  Quite honestly, it's still really hard to talk about and to think about.  We miss him so incredibly much. 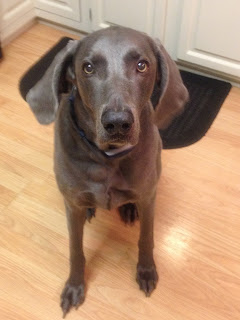 His passing was unexpected.  A few months ago, he seemed perfectly healthy, and we even commented on how puppy-like he looked even though he was 11.  It's like he grew into an adult body but never lost his puppy face.

Then, in November, we knew something wasn't right with him.  He started acting weird.  He wasn't eating regularly, he moped around the house, and he just didn't seem himself.  We made several trips to the vet, and - at first - she thought he had Lyme disease.  She ran some tests and it wasn't Lyme.  At that point, she suggested we take him for an ultrasound as she was worried about his spleen.

That was right before Christmas.  The vet who did the ultrasound told us that Chance had tumors on his spleen that had spread to all of his vital organs.  He told us to enjoy the holidays with him and then prepare to say goodbye.  It still shocks me to think about those words.  He had seemed perfectly healthy a few weeks before, and now we were told we had less than a month to spend with him.

I was in denial at first -- this couldn't be happening -- and then I started moving through the common stages of grief on repeat: anger, bargaining, sadness... then back to shock and denial.  It seemed like a never-ending cycle.  There are days when it still does.

It just doesn't seem fair that you have to fit in the rest of a life in the span of a month.  How do you even do that?  How is it possible?  We had no idea how to do it, so we did all we could.  We kept him comfortable.  We spoiled him.  We loved him.

In the midst of all this sadness, we are so grateful we had the opportunity to say our goodbyes and be with him when he went to the rainbow bridge... but it was one of the hardest things we've ever had to do.  We still look for him to greet us at the door when we return from work.  We still hear the pitter-patter of his feet at night.  We still think we see him under our kitchen table when we glance down.  It still doesn't feel like he's gone.

My husband and I got him early in our relationship.  We had only been dating for about six months, and, looking back, it probably wasn't the smartest idea to get a dog together that soon (but obviously it all worked out).  So what makes this even harder is that Chance was there for everything with us.  My husband and I have barely known each other without Chance in our lives.

The night we had to say goodbye, I kept telling him how much I loved him and that he better wait for us up there - that we would see each other again.  And I know we will.  I know. 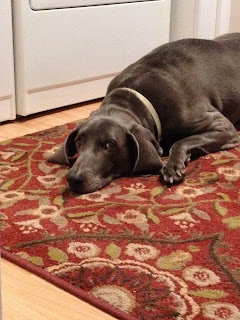 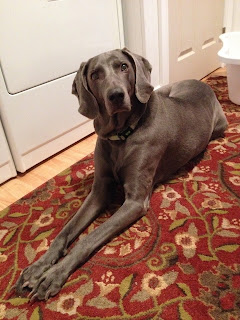 In the meantime, though, I don't want to forget all of the wonderful memories he created for us.  Our lives are better because he was in them.  He was part of our family and always will be.

* * * * *
I'll never forget the day he became part of our family.  He was so little and he had such big ears and big paws.  He slept on my lap on the car ride home, and I remember crying tears of joy because I was so happy he was ours.

I'll never forget taking him to puppy kindergarten where he never listened to anything but won all the doggie races... and the hearts of everyone there.

I'll never forget all of the times we came home to chewed up shoes, books, remotes, pillows...
You name it; he chewed it.

I'll never forget taking him for walks in the snow and for hikes through the woods.  He loved being outside and exploring.

I'll never forget the day I went into labor with our son and Chance laid with me on the couch, his head resting on my baby belly.

* * * * *
Chance was taken from us all too soon, but he gave us more than we could ever ask for.  He was the BEST dog in the whole wide world, and we will never forget his unconditional love for us. 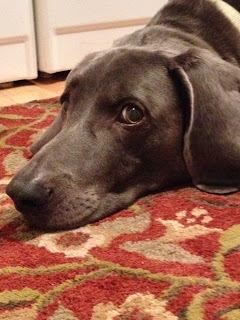 We miss you more than anything, buddy, and we'll love you forever.

Posted by thebusybrunette at 1:34 PM